The Road to Recovery

As humans we are largely creatures of habit. We find comfort in the familiar and any forays outside of that comfort zone usually result in large amounts of anxiety and fear. For many people that uncertainty can be crippling and thus we stick to the people-places-and things that we are used to, because we feel safe there. But what happens when those things most comfortable and familiar to you suddenly disappear? For Lepri BJJ/Alliance Charlotte member David Eilers that’s exactly what happened.

Preparing to leave his home early one morning three years ago, a feeling of uneasiness came over him. His wife, noticing the sudden change in his demeanor began questioning him, only to find that the responses he gave her weren’t making sense. “Whatever responses I gave her, she didn’t understand. No matter what I said or tried to tell her it just wasn’t getting thru, and to make things worse I had absolutely no idea that the ‘words’ I was using weren’t actually meaning anything” says David. Fearing the worst his wife rushed him to the hospital hoping for some sort of explanation. Upon being assessed an unfamiliar word started being thrown around by the doctors “Aphasia”.  Like nearly 800,000 people/year,  David had suffered a stroke, seemingly out of nowhere.

“At first I honestly didn’t believe it. But when the doctors asked me what my name was and where I lived and I had no answer for them…I knew something serious had happened”. Unlike some forms of a stroke Aphasia mainly affects the parts of the brain affecting speaking, reading writing and listening. For many people (including David) it means completely relearning how to read and write, and a long difficult process of recovering vocabulary. Perhaps worst of all, there is no set time for a full recovery as individual results and recovery vary greatly. “At first they (neurologists) told me my recovery would plateau around the 18 month mark and wherever I was at that time is where I would likely remain. But we are nearly 3 years in and I’m still getting better.”

Asked what he attributes his continued improvement to, David credits his team of speech and language pathologists along with Jiujitsu for helping him return to form. “The best therapy isn’t $80/hour holed up in some clinic, it’s interacting with other people and Jiujitsu allows me to do that. Aphasia really affects the mental processing of language, so in daily life it takes me a little while to go from hearing the words being said-to understanding the meaning of the sentence as a whole. But in Jiujitsu the repetition from drilling and positional work allows my brain to make a connection that lasts. And that is helping to speed my overall comprehension. Of course the physical part helps, but the interaction I get with so many different kinds of people because of Jiujitsu, it’s really invaluable. I went from understanding maybe 10% of what was said to me, to looking at returning to work as a Financial Analyst in the immediate future. The difference is that remarkable”. 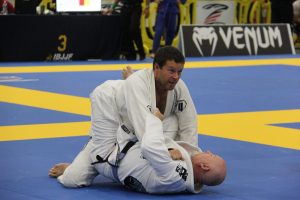 An invaluable member of the team, David continues to challenge himself. From competing alongside his teammates to taking part in multiple training camps he refuses to let his setback dictate what he can and cannot do. The determination and commitment he shows are indicative of the Alliance Team values and he is surely someone other practitioners can learn a lot from.