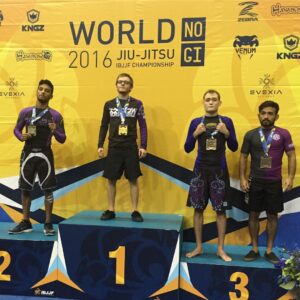 As the end of the 2016 No-Gi season crept towards a close, all eyes turned to San Francisco-host city for the final event. The 10th edition of the IBJJF No-Gi World Championship would provide an opportunity for grapplers from all over to make one final statement, one last push to assert themselves in their respective divisions. All weekend the intensity was high as competitors hoped to add the life changing title of “world champion” to their resume(s).

Starting in 2007 with inaugural black belt champions such as Rubens “Cobrinha” Charles, Jeff Glover, Pablo Popovitch and Roberto “Tussa” Alencar, the tournament has long been a place where grappling standouts come to shine. Grapplers from all walks of life, and all different teams come to San Francisco to prove their mettle, and to demonstrate that their grappling prowess isn’t only limited to the Gi. The IBJJF has long been known as the organization which houses the top competitors, and with this event being one of its premier No-Gi tournaments (along with No-Gi PanAms), the stage was set for more amazing performances. Within this field of historic grappling figures and future legends, a few competitors from Alliance Charlotte made the trip to the west coast and looked to make their own mark upon the sport, and to hopefully leave their names etched in history. Hot on the heels of their successes at local tournaments like the New York Open, Charlotte Open and national tournaments like No-Gi PanAms these few hoped to finish the year on a high note. As the weekend progressed, and increasingly more competitors were eliminated they continued to fight. Thru attempted sweeps and hail-mary submission tries by their opponents they battled, the memory of grueling training sessions and lessons learned fueling them to fight harder, to push until the end and to give it all they had. Though they were small in number, they fought as if the entire team were with them-determined to stake their claim as the best.

At the end of the weekend as brackets were analyzed and results checked and rechecked, three from Lepri BJJ-Alliance Charlotte stood tall on the podium. They had done it, fighting their way thru fields of talented and determined competitors they had reached the coda. Fighting until the very end they made sure to end their season on a high note, and what a high note it was with Roberto Jimenez becoming the blue belt No-Gi World Champion, Dean Lewis becoming the purple belt No-Gi World Champion, and Mike Schweiger becoming the brown belt No-Gi Silver Medalist.