Oss? Oss! If there is one word that could represent aBrazilian Jiu-Jitsu, without a doubt that would be “oss”. It doesn’t matter what team you represent, it doesn’t matter whether you are a hobbyist or avid competitor, it doesn’t even matter what country you are from, if you do Brazilian Jiu-Jitsu you’ve heard this term. A term that is somehow; greeting-show of respect-answer to a question-and compliment all rolled into one. But where did it come from? Many times on the mats, beginners will furrow their brows in confusion and ask themselves, “what did they just say? Ossss? What’s does that mean”. However, over time they too will get into the habit of answering questions with the same conviction “oss!”. But what is it? Where did it come from? What is this “thing” that is all things to all people, yet somehow remains shrouded in mystery?

Fittingly enough, the term “oss” (or osu if you’re fancy) actually has it’s roots in Japan. That’s right, just like our beloved art of Brazilian Jiu-Jitsu-this term actually has it’s origins in the Far East. The phrase “OSS” is actually short for Onegai Shimasu, which is an honorific expression for hoping, desiring, or wishing. Basically…it’s a very polite way of asking permission to do something, acknowledging something/someone, or inviting someone to do something (like inviting a partner to train). In traditional Japanese martial arts “OSU” is used throughout the class. When you bow and greet your instructor you say “osu”, when your partner lands a good strike you nod your head and utter “osu” in acknowledgement, before you start sparring with your opponent you bow and say “osu”.

Ok, everyone knows that (that’s what you’re saying to yourself). But did you know that there is actually ANOTHER form of “oss”? Known as “OSSU” this term is actually short for Oshi Shinobu, which connotes patience, toughness, or perseverance. To embody this term is to never give up, to always keep pushing, and to endure the toughest of trainings. You push yourself until you think you’ve reached your limit. Initially it’s your body that tells you to stop, but your mind keeps pushing you. Then your mind wants to quit, but your spirit keeps you pushing. You endure the pain. You persevere. Why? Because in life there is no quit, you must always push on. That is Ossu. 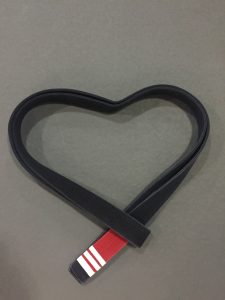 So you are cutting weight for a tournament and your significant other got you a box of chocolates for Valentine’s Day.  Perfect gift right?  Most partners of jiu jitsu practitioners understand that although thoughtful, this might not be the best gift for a “hangry” partner!  Jiu jitsu practitioners’ partners are definitely something special.  They put up with our long hours away from home for training, our smelly gis and our crazy diets and weight cuts.  They let us spend ridiculous amounts of money on the latest new gi and spats, tournaments and private lessons.  They listen to us talk about weird things like “berimbolo” and “spider guard” or sit with us as we watch technique videos.

Having a partner that shares our jiu jitsu passion is a luxury that not everyone has.  Having a partner that is patient and understanding with our jiu jitsu training is a must!  As noted above, they have to put up with a lot!  Be sure to constantly thank them and make sure to give them extra attention as needed.  Be supportive and attentive to their interests and hobbies with the understanding of how much you love yours.

For those of us fortunate to have a partner that trains, mat time is a great way to grow the relationship.  Sharing the passion of jiu jitsu can bring a couple closer together as they spend extra time together training.  Traveling together for tournaments turn into mini vacations and dinner conversations revolve around technique and upcoming matches.

As with all things in life, balance is key.  Balancing your love of jiu jitsu and the love of your life can be delicate but also rewarding!  Be grateful for your significant other and maybe you will get a new rashguard or gi instead of chocolates for Valentine’s Day!