As the end of the year approaches many people begin pondering New Years resolutions, and the changes they’d like to make. Somewhere near the top of every list is “get in shape/lose weight”. Year in and year out people resort to the same traditional gyms and the same workouts to reach that goal…and year in and year out they lose interest and quit. Why not try something different: a non-traditional workout that’s just as fun as it is practical. Below are THREE reasons you should choose starting Brazilian Jiu-Jitsu for this year’s resolution.

Get in Shape– The basis of Jiu-Jitsu is movement, and to execute those moves properly requires a certain level of physical fitness. Which means that pushups, situps, and light jogging are on the menu for the new practitioner. But fear not , just at BJJ is for everyone-the workouts can be catered to anyone. The key is continuous effort, not perfection. Many people actually begin to revel in the new challenge as the difference in their physique quickly reflects all of the hard work. With its emphasis on plyometrics and calisthenics JiuJitsu is a fantastic way to get a workout, while keeping you engaged in new and entertaining ways.

Learn Self-Defense– Brazilian Jiu-Jitsu was originally developed with self-defense in mind. One of the founders of the art, Helio Gracie said “Jiu-Jitsu represents the triumph of human intelligence over brute strength.” No longer would people need to turn to martial arts with a ‘one size fits all mentality’ regarding protecting yourself. Because the movements in Jiu-Jitsu rely on neither size nor strength, the moves are usable by everyone. Headlock escapes, sucker punch defenses, choke escapes, judo throws…and that’s just in the beginner classes! A full-body workout that’s fun, and helps you keep you and your loved ones safe? What’s not to love?

Break out of your comfort zone– Trying something new can often be a scary experience, but the benefits you gain by forging thru are worth it. Jiu-Jitsu is no different. Trying new movements, in a new environment, with people you don’t know can be daunting. But fear not, one of the beautiful parts of Jiu-Jitsu is that literally every single person has been in that position before. The initial uncertainty (and sometimes fear) fades as you realize that nobody is judging you in the least. On the contrary, they want to help you! Because everyone had to experience that uncertain first day, they remember the feeling and try to alleviate it for the new people. People from all walks of life; athletes, lawyers, doctors, students, teachers, police officers, musicians etc. are excited to meet you and to help you along your journey.

We are in the last month of the year-just three more weeks remain until the end of the year, and as usual, by this time all the teams are celebrating the past year with their students, belt promotions area big part of the celebration. If your name is not on the promotion list, do not be discouraged. This is the time to take a deep examination of your conscience and ask yourself how much you really worked to earn that belt.

All students have their own characteristics, and teachers evaluate them daily. Do not think that it is just the test that will tell you whether or not you are prepared to tie the new belt around your waist, your day to day training and the time shared on the mat with your teammates will tell you if  your time to be promoted has arrived .

We want to learn fast, but we do not have the patience to do the positions; We want to perform perfect movements, but we do not have time for drills; We want to submit everyone during all of the the rolls, but we do not review the submissions frequently; We want to have cardio to do all the rolls in class, but we are always skipping the warmup; We want to win all the tournaments in which we sign up, but we miss several classes during the camp; We want to be respected by the teammates, but we barely say hi to them when we arrive at the gym. I could make a long list of the small mistakes that we make, but these are enough to make us think twice about the actions we have taken (often without realizing it) but which we should avoid. An honest talk  with your best friends can certainly help you to set goals to eliminate all these small distractions that keep you far from your progress-and as a result-far from the new belt.

Those who train know that when the end of the year approaches, some teammates who have not been seen for months suddenly become frequent figures in training. Others begin to bombard the Instructor(s) with promotion related questions, there are even cases of subliminal messages, where the student begins to wear the color of the desired belt all the time…trying to convince the Instructor that the color actually looks good on them. Joking aside, do not be this person!

All you have to do is dedicate yourself and when you feel like you are doing as much as you can-dedicate yourself a little bit more, and you will see how rewarding it is to receive your new KNOWING that all of your effort has been rewarded.A well-deserved promotion has a special meaning, it has stories of victories and defeats and knowing how difficult the path has been. It gives a special brilliance to your journey.

We want to know some of your promotion stories, tell us how it went for you! 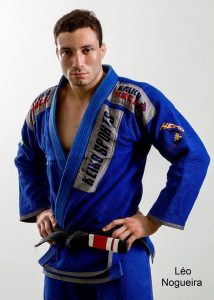 When Leonardo Pires Noguiera-known to most as “Leo”-began studying Brazilian Jiu-Jitsu, he did so because he was interested in learning self-defense. He didn’t set out with the intention of one day becoming a Jujitsu World Champion as many people do, he just hoped it would be a good workout. But as it turns out…JuJitsu had bigger plans for him. Although his original focus was on self-defense he became successful on the competition scene almost immediately, winning his first World Championship when he was a blue belt.

Now a multiple time black belt World Champion, he joins a distinguished list of greats, including “Cobrinha” and Lucas Lepri, asked to teach at the prestigious Alliance Headquarters alongside team founder Master Jacare Cavalcanti. Leo was gracious enough to take time away from instructing to answer a few questions regarding his toughest fight, the pressure of being an instructor and what the future holds for him.

You’re a 3-time Black Belt World Champion, what are some of your other goals in BJJ?

I hope to one day have my own school, and to create my own black belt world champion!

What’s it like to teach at the American headquarters of such a prestigious team? Is there a lot of pressure to “uphold the standard”?

*laughs* I can’t lie, yes it’s a lot of pressure!  Especially because guys like Cobrinha and Lucas were here teaching before me, so I absolutely must stay true to the high level of skill and integrity put in place.

Who are some of your favorite competitors to watch, outside of the Alliance team?

I can’t pick just one so I’ll say; Roger Gracie because his style of JuJitsu is so basic yet so efficient, Rafael Lovato Jr because (in my opinion) he is the best American BJJ competitor and the first and only one so far to be a Brazilian Absolute champion in the adult Black Belt category, Demian Maia who has the best BJJ in the UFC, and Xande Ribiero because he won the Mundials 7x with two absolute titles AND he’s one of the few guys to win the adult division at 34 years old. He might be my overall favorite.

Who was the toughest competitor you’ve ever faced?

What are your thoughts on the recent rise of No-Gi Submission only competitions?

I think that most of the submission only tournaments end up being kind of boring, because of the structure of the tournament most athletes don’t want to take risks (to avoid losing all at once) so you end up having most fights end in a draw.

Last question for you Leo, if you could have a dream match with ANYONE…whom would it be?

Well out of the people considered “my generation” of BJJ competitors I think I’ve already faced everyone. So…let me think. You said anyone, so I’ll pick someone from the older generation…Saulo Ribeiro.